Break-In was the eighth episode of Season 1 of The Golden Girls TV series, also the 8th overall series episode. Directed by Paul Bogart and written by series co-executive producer Susan Harris, it originally aired on NBC-TV on November 9, 1985.

After a Madonna concert, the girls arrive home to discover their house has been broken into. This leads the girls to seek out means to protect themselves. First, the girls have a burglar alarm installed. Also, at Rose's insistence, the girls take home a guard dog from the shelter, that turns out to be quite cowardly, hiding in fear from a hungry Sophia.

After returning from an errand, Rose finds Blanche in distress on the couch. Blanche tells her that she borrowed Rose's pocket hairspray and went to the police station for an update on her jewels and Dorothy's mink stole but, in a horrifying experience, discovered that Rose's hairspray was mace. She blinded herself and was detained and later let go by the police, who originally thought she was on drugs.

Rose then tells the girls she purchased a handgun, which she later used on "intruders," that turned out to be Blanche and her boyfriend, Lester. Destroying Blanche's favorite Chinese vase, She realizes that she is not okay and may be permanently affected by the experience. However, after subduing a parking attendant she mistook for a predator, she had a revelation and learned that she could defend herself in a violent situation. The thieves were caught, the cops found Dorothy's stole and Blanche forgot she put her jewels in the Freezer. 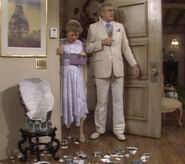 You shot my vase!

I’d rather you shot Lester! 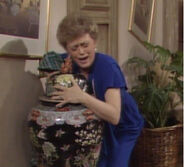 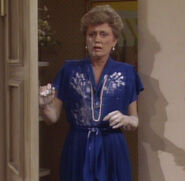 They got my jewels.
Community content is available under CC-BY-SA unless otherwise noted.
Advertisement