Blanche and the Younger Man

Blanche and the Younger Man

Blanche and the Younger Man was the ninth episode of Season 1 of The Golden Girls TV series, also the 9th overall series episode. Directed by Jim Drake and written by James Berg and series co-executive producer Susan Harris, it originally aired on NBC-TV on November 16, 1985.

When Rose's dynamic mother comes to Miami for a visit, it becomes apparent to everyone that Rose needs to lay off and stop smothering her energetic mother who just wants to live life. Rose eventually goes overboard, scolding her mother for her lifestyle choices in front of a large group. Alma, enraged, says that she plans to leave and go to Texas to visit Rose's brother sooner than planned. However, after Rose admits her behavior is out of fear of her mother's death, Alma forgives her and they reconcile. They briefly fight again when Alma admits she dated and moved in with a much younger man, a farmhand named Ben, for three years. However, Rose takes her mother's happiness into consideration and they reconcile almost immediately. Meanwhile, Blanche is shocked when her Jazzercise instructor, Dirk, asks her out on a date. She is concerned because he is half her age and she does all she can to make herself look younger in order to keep up with him, including vitamin regimens and exercises that she is too old to safely perform. However, when Blanche goes on her date, she realizes that the age gap is too wide for the relationship to work; she and Dirk have nothing in common and Dirk admits that Blanche reminds him of her mother, who lives far away.

Rose: Now come on, why don't you take a nap while I fix you something to eat?
Alma Lindstrom: Rosey, I'm not a child. I don't need a nap.
Rose: There's nothing wrong with taking a nap - Bob Hope takes naps!
Sophia Petrillo: Unless he's in the bedroom now taking one, I think she'd rather stay here with us.

Blanche tries to be sexy. 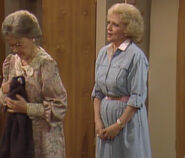 Rose tries to talk to her mother.

Blanche, and Dirk at dinner.

Community content is available under CC-BY-SA unless otherwise noted.
Advertisement