Alas, George's character passed away in a tragic car accident nine years prior to the September 1985 debut of the Golden Girls TV series, meaning George passed away in the TV series in about 1976.

A good number of Golden Girls fans are confused as to the home's address:

The home is not addressed as 6151 Richmond Street, Miami, Florida.

It is true the home address is 5161 Richmond Street, Miami, Florida, which is stated by Blanche while she is on the phone with 911 following a faulty wire burning down newly-wed Sophia and Max in Season 4, Episode 7, 'Sophia's Wedding (Part 2).'

Throughout the time Blanche lived in this house, following George's passing, Blanche places an ad on the community bulletin board in a local supermarket in search for potential housemates. Within no time, two potential housemates show interest and make their appearances.

In Season 1, Episode 25, 'The Way We First Met', it is first Rose Nylund, who shows interest when she stumbles across the ad on the community bulletin board at a local supermarket along with her black-coat, medium-haired cat, Mr. Peepers. Blanche observes Rose from a distance and witnesses Rose is a bit of an air-head so Blanche turns down Rose's wish to be her potential housemate. However, it is with a random act of kindness that Rose offers her Mr. Peepers to the young, little boy who comes up to Rose in the supermarket. Seeing this, Blanche decides to ask Rose to be her housemate after all.

Description of the home[]

As some Golden Girls fans may know, the ranch house seemed to defy logic as the entrances and exits were not physically possible. For example, the exit from the kitchen was supposed to exit into the garage but the location of the exit itself would have lead into the rear hallway and the bedroom area. This also did not match the external shots of the house as the garage was clearly at the front of the home and on the opposite side of the kitchen.

Next: These inconsistencies appeared over the course of the series. Originally, the picture at right of this page depict the house set up in Episode 1, 'The Pilot.' The girls would exit upstage right to get to Blanche's room and exit directly upstage to get to the lanai. The rest of the three bedrooms were down the hallway at the upstage left exit.

Next: However, following 'The Pilot' episode, Blanche's room was moved unexpectedly and without transition to the upstage left hallway with the other bedrooms, and the exit for the lanai was moved to the upstage right exit.

Next: Rose's bedroom, as time went on, was moved from the end of the hallway (where Blanche's bedroom was moved to) to the stage right side. This would place her room right outside of the back living room windows for Rose. Given this supposed layout, the audience should be able to see the external wall of Rose's room from the living room. But, you cannot.

Next: The upstage exit from the kitchen was often purported to be the home's garage. However, this is also physically impossible. As mentioned above, if that were the case, then the garage would occupy the same space as the back hallway and bedrooms, which, again, does not match exterior shots of the house.

And finally: As to the picture depicted of the ranch home on this page, according to exterior shots of the house, the garage would have been located on the right side of the house when facing the home. Which would place the garage in relation to the living room and kitchen where the cameras actually were when they were shooting the show. This meant that viewers watched the girls from within their garage.

Well, it just simply goes to show that even with these tidbits and inconsistencies, the overall storyline, character development, and quality of the TV series supersedes.

An official floorplan for the Miami ranch home was never created by the production team for the house. However, several Golden Girls fans have designed a few possible floorplans based on speculations and observations. 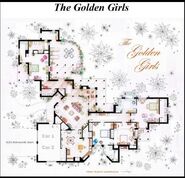 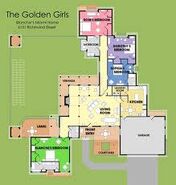 For the first season, the exterior shots of the house were taped on site and location of an actual ranch home in Brentwood, Los Angeles County, California. The house itself still stands in what is reportedly a quiet neighborhood.

From the second season onward, exterior shots were taped at Walt Disney World's Hollywood Studios in Orlando, Florida, where an exact replica of the Brentwood house was built. Park tourists could see the house as part of a tram tour along the "Residential Street" attraction, which features other house exteriors, including Harry Weston's house from Empty Nest right next door. The attraction was removed in 2003.

Community content is available under CC-BY-SA unless otherwise noted.
Advertisement